Reviews go on as print sites are closed and sold 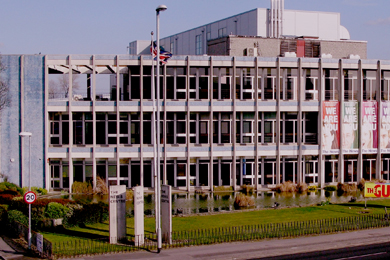 UK newspapers are continuing to review print capacity following the plans to close two sites and the sale of three others.

Reach is in talks with staff representatives after it revealed it wants to close print sites in Luton and Birmingham, with a total of 150 jobs at stake.

Reach, then known as Trinity Mirror, bought the former West Ferry Printers site in Luton in 2018 from Richard Desmond's Northern & Shell, publisher of mastheads including the Daily and Sunday Express, Daily Star and magazines such as OK!

Meanwhile, the Daily Mail has bought three print sites from what was Johnston Media.

The formalities saw dmg media - which is a subsidiary of Daily Mail & General Trust, which bought national newspaper i from JPIMedia in 2019 - buying JPIMedia Print Holdings Ltd and its subsidiaries in October.

The sites in Portsmouth (Hampshire), Dinnington in South Yorkshire, and Carn in Northern Ireland are continuing to print JPIMedia's newspapers.

Pictured: The former News Centre in Portsmouth, opened in 1969 with pioneering Halley-Aller double-width offset equipment, is still home to JPIMedia's print operations in the city