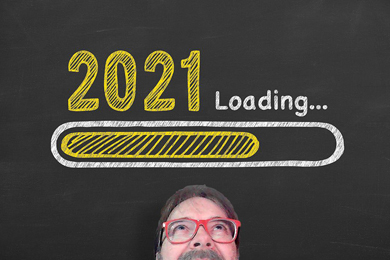 As I write this column, vaccines are beginning to make their way to first responders in the US, the New Year has begun, and maybe, just maybe, the world is seeing a light at the end of the tunnel.

In the past, I often wrote New Year columns with predictions for our industry in the upcoming years. If you went far enough back, you'd see some doozies, including:

-PDF files becoming the method of choice for ad distribution (it replaced FedEx in 1994);

-the Zip drive overtaking Syquest cartridges as the storage device of choice (1994);

-InDesign overtaking QuarkXPress and PageMaker as the design application of choice (1999);

-pocket-size camcorders would be used by most reporters in the future (2008);

-newspapers would not - as predicted by some - be disappearing in the next ten years (2009);

-JC Penney was making a big mistake by moving away from print advertising (2012);

-metros would suffer more than community papers in the 'digital future' (2016);

-Joey Young would have success starting newspapers in Kansas (2016); and

-newspapers owned by venture capital groups would lose stock value and readership (2019 in an interview with the Washington Post).

This year, however, being a bit different from the years which have preceded it, I'd like to take a look back - about ten months, give or take.

COVID-19 was a new term to most of us. Newspapers were having to quickly learn how to produce papers and find advertisers during a pandemic. It seemed like the sky was falling quickly, and there might be no way to keep it from crashing down on our industry.

In my March 2020 column, I made three suggestions for newspapers searching for straws to help them stay afloat:

-find ways to bring in new revenue through your traditional newspaper;

-find ways to use tools to bring in new revenue; and

I wasn't blowing smoke. I was going through similar emotions as my newspaper friends and clients. The speaking business - where I made approximately half my income - was gone, with no return in sight. My publishing company, focusing on study groups and churches, saw an immediate 80 per cent drop in sales. We had to find ways to bring in new revenue, while continuing to publish books, even if it meant losing money on them in the short term. And we had to find ways to help our readers, because we need them to return when the pandemic is over.

My businesses followed those three suggestions:

-we continued to create books: For my speaking/consulting clients, I've been fortunate to be able to work with them virtually throughout the pandemic;

-at my publishing company, we created two new divisions to create new revenue. One didn't work out. The other has become our major source of revenue. At newspaperacademy.com, we began rolling out classes to help newspapers make needed changes because of the pandemic;

-the publishing company created a new continuing education division to help our readers, which brought in revenue and allowed them to complete their CEU requirements online.

I've seen community newspapers doing incredible things to make it through this pandemic period intact. I know local owners who have bought nearby papers before they could be shuttered by owners located in other states. I've seen publishers start new publications, offer free advertising to businesses that were at risk of closing - knowing they would need these advertisers' business after the pandemic has passed - and come up with other creative ideas to serve their customers and advertisers.

To sum up the past ten months, I'd say it's no accident most newspapers are alive and kicking, even if they aren't all thriving, as we begin 2021.

I'm not sure my (or anyone else's) speaking business will ever go back to 100 (or even 20) or more cities per year. I doubt my company's book sales for all of 2021 will match sales in January and February 2020. I'm willing to bet, however, that the work we've done to provide services during this extraordinarily uncommon year will pay off in the years to come.

I'm proud to be associated with community newspapers.

Kevin Slimp is founder of newspaperacademy.com and the University of Tennessee Newspaper Institute. In 2017, he founded Market Square Publishing. Despite the changes brought on by COVID-19, he still keynoted several newspaper conferences virtually in 2020.