Who cares about Murdoch media claims, and why inquiry matters to democracy 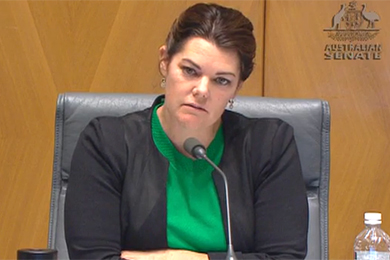 If Sarah Hanson-Young was in any doubt about how hard the task of her Senate inquiry into media diversity, it was spelled out on Friday.

Long-serving prime minister Robert Menzies famously "hadn't the guts" to go against the media, and there's no suggestion that either of today's dominant parties are any different.

Greens senator Hanson-Young's challenge is to come up with a compelling reason why Scott Morrison's government should respond to the clear message emerging from witnesses to the first two days' sessions, when upsetting the Murdoch media which is central to the inquiry's terms of reference, might draw defined and predictable results.

And her task is made more difficult by the fact that Rod Sims, chair of regulator the ACCC, doesn't see it.

Friday's second day of hearings was an opportunity to glimpse into the mind of the man who is charged with managing competition in Australia; who thinks competition has been increased by the presence of a few minority mastheads he reads personally - "a lot of people I know read the Guardian," he said - and who allowed News Corp to build its near monopoly in print by acquiring APN's regional media, only to stand by while they then closed most of them.

Fronting with colleagues Tom Leuner (mergers, exemptions and digital chief) and Morag Bond of the digital platforms team, Sims argued that while News owned 65 per cent of Australia's newspapers, "companies think of themselves as digital first now" and that "going digital has enabled increased competition".

The ACCC "doesn't look at diversity directly" - a matter for the Australian Communications and Media Authority, Sims says, needing to be pressed to connect diversity with competition.

On the APN acquisition, Sims said the regulator decided the papers were "very local", with little crossover with metro tabloid the Courier Mail. "You wouldn't think of them as substitutes. There wasn't a competition issue (though) some would say there was a common voice behind them."

Tellingly, he dismissed last year's 100-plus print closures with the comment that "the ones they closed were just local media", something that was "difficult for big organisations to do".

Nobody asked why in the circumstances, News had bought them in the first place, and chose to close the print editions rather than sell them to Antony Catalano's Australian Community Media, a willing buyer.

And it was left for Denis Muller (below) to mention that while some new independent regional print editions had been launched, News had developed a near monopoly as contract printer of many of them, of Nine's metro dailies, and of many of those published by ACM. History tells how precarious a position that has proved in the past.

Sims' position was that Australia's merger laws were not adequate, and that while the ACCC "would not have allowed News Corp to buy Fairfax", he did not know whether that would stand up in court. The ACCC would "probably have opposed" News buying national TV network Ten, "but it never came to that" ... or the prospect of Rupert Murdoch's son Lachlan being part of a consortium doing so, for that matter.

Frustrated by his evidence, senator Kim Carr repeated the assertion that competition and diversity overlap: "Is it any wonder people criticise you for arguing that case," he asked, but Sims was unrepentant. "Even with improved merger laws we would still have approved News/APN," he said.

Whether or not it mattered that News was owned by an overseas company - as Guardian Australia is - was subjective and a matter for the Foreign Investment Review Board. Other topics - such as whether funding for the ABC should be legislated - were "probably beyond our remit", Sims said.

On notice, he agreed to come back on the subject of what merger rules needed to look like, and not in the four or five months his team reckoned it would take to look at the subject.

Senator David Fawcett asked whether the ACCC had looked at the impact of media diversity on democracy and the quality of journalism, and received a mostly digital-focussed answer: "We did a bit," he said, pointing to the effect of the bargaining imbalance; whether newspapers got enough advertising; concern about echo chambers, clickbait, and "serving up people what the algorithm says they want".

Morag Bond said the commission had also looked at the reduction in the number of journalists, and the impact on local government and court reporting.

"Is there any other way we can highlight to people that they are only getting one side," said senator Fawcett, Sims replying that the "very complex" issue - in which the ACMA has power to take down deliberate misinformation - was "an issue to be watched". Another question on notice.

So is Guardian Australia - which like its UK namesake, belongs to the independent Scott Trust - the "antidote" to the concentration of Murdoch-owned media. Managing director Dan Stinton wasn't sure how much of a counterbalance Guardian could be, given that it was "substantially smaller" than News Corp, with editor Lenore Taylor adding, "I don't think that's what diversity means, and that's not our role".

"We're probably more likely to look at a story about someone affected by the influence of power," she said. "We don't ever try to bend the facts to take us to a place; impartiality is going where the facts take you."

A modest and professional presentation, saw the Guardian duo playing down the influence News Corp's papers have, bleeding into other digital outlets. "All media organisations want their stories to be noticed," said Taylor, agreeing that the scale of News and Nine and their crosspromotional opportunities, made it easier for them.

On the bleed from opinion into news, "you do have to make it clear what is fact and what is opinion," she said, adding that most Guardian journalists were not even allowed to write opinion, "and we make it clear which is which.

"Secondly opinion has to be founded in facts."

Having worked twice for News, Taylor said she "did notice more briefs out of the news conference that had a particular slant", when she returned in 2007. "But if I questioned it, that was accepted... and sometimes, that brief would appear under someone else's byline."

Papers were "generally straighter in their approach to news" when she had held a more junior role from 1988. And in response to Kim Carr's question about "why climate change was a more contentious subject here," she explained clearly that it was "because it is presented as a matter of debate, rather than a matter of science, which it is".

And food for thought on the subject of how Australia might control the digital giants' use of data, with Stinton's suggestion that while it would be "incredibly difficult for a country like this to mandate the break, it could mandate the purpose uses under privacy regulations, which has a similar effect as breaking them up, but is actually possible."

A tax incentive for investment in journalism "would really help", he said, the point picked up by senator Hanson-Young, who saw the problems of a grant programme, "with the government of the day cherry-picking its favourite outlets".

It was Denis Muller, a senior research fellow at the University of Melbourne's Centre for Advancing Journalism, who quoted Robert Menzies' "we haven't the guts" above, a theme he pursued in his evidence.

"That imbalance distorts our relationships," he said. "Their role is to hold government to account, not to intimidate it."

Questioned by Kim Carr on the evidence of the ACCC, News and Nine that there was plenty of diversity, Muller's comment was that it sounded "like a distinction without a difference.

"If you have as News does, a high degree of consonance on particular issues, it's hard to argue that there isn't one owner and one voice," he commented, citing the portrayal of former prime minister Kevin Rudd after his appearance before the inquiry, when eight newspapers had almost identical coverage.

Muller agreed that broadcast media drew a lot of its content from established media, "by a country mile", very few breaking stories having not been broken by the morning papers. "I could set aside a week to tell you about that," he said, eventually agreeing to do so.

Said senator Carr, "It goes to the issue of the dominance of established media," and while the IPA, Press Council, media proprietors, and ACCC might deny this, it was "quite clear that the issue of ownership remains critical".

Offering to "go into the death of the Argus" in Melbourne, Muller could no doubt find similar stories in the demise of Brisbane's Sun and other centres where competition to Murdoch-owned mastheads has dwindled.

A consultant to the Finkelstein inquiry, which reported in 2012 on similar terms, he's familiar with the problems it faced, including "lack of political gumption.

"Any number of royal commissions have tried to tackle this and have got nowhere," he said.

"Even when there was proven criminality", the UK's Leveson inquiry - called after the News International phone hacking scandal - found "it proved impossible to get recommendations through the British parliament," he said.

MEAA's Paul Murphy and Marcus Strom reported support for a new single regulator of media content with "serious" penalties, citing examples in the UK and Canada, where specialist panels have statutory roles on diversity of media voices. "Change in Australia needs to be on those lines," Murphy said, "to ensure that mergers don't simply result in concentration and an increase in the power of the remaining players."

Murphy seemed less concerned about News' developing dominance of the contract printing segment, Kim Carr pointing out that Nine's newspapers were mostly printed by News (as are many ACM and independent titles). "There is some sharing," he admitted.

"Sharing? Is that what you call it," Carr asked, but the MEAA's media federal president Marcus Strom was apparently more concerned that 'sharing' arrangements meant football results could not appear in the Newcastle Herald.

The MEAA would "absolutely support changing the tax environment," with incentives for public interest journalism similar to those for research and development.

The way to improve things was to get more players in, but Strom admitted that Guardian Australia and Daily Mail were both supported by external owners, while others such as Huffington Post had "withered on the vine" and contracts with Google and Facebook "just kick the can down the road for a few years".

"We're worried that Facebook and Google money could support the present concentration rather than diversification," he said.

So given the frustrations of earlier inquiry chairs over previous generations, can Greens senator Sarah Hanson-Young do any better?

After Friday's second session, the inquiry - called last November - has been adjourned until April 12, and has until August 4 to report. It also faces the challenge that the Morrison government has already knocked back the call for a Royal Commission on the subject, made in former prime minister Kevin Rudd's parliamentary petition, which was signed by more than 500,000.

Hanson-Young has some work to do yet, if she is to balance the vested interests sufficiently to get the government to take any notice.

It will probably also take action on the part of those who care about the subject to get the general public to do the same.