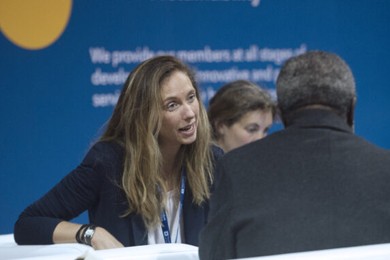 The first of four Swedish-funded reports shows how African news media is being harmed by sexual harassment and failure to report it.

The first-of-its-kind insights from WAN-Ifra’s Women in News programme shows the disturbing scale of harassment.

The eight-country study indicates almost half of women had been sexually harassed at work – alongside one in five men and about 40 per cent of gender non-conforming individuals.

Many cases of physical and verbal sexual harassment go unreported because the victims fear further victimisation and lack confidence in management systems and interventions. And when action is taken, the results are “often underwhelming,” the report says.

The research is the first phase of a multi-region study undertaken in partnership with City, University of London, which will continue to look at Southeast Asia, Russia and the Arab Region. It surveyed 584 respondents from eight countries across the continent – Botswana, Kenya, Malawi, Rwanda, Uganda, Tanzania, Zambia and Zimbabwe.

Almost half of the respondents (46.12 per cent) said they had witnessed at least one incident of sexual harassment, with nearly one in five saying they had seen five or more incidents at their workplaces. Yet, only 30 per cent of cases are reported, as victims said they were afraid filing a formal complaint would lead to the loss of their jobs, negatively impact how they work, lead to retaliation or mean they would be negatively labelled.

“The research highlights a lack of trust in the organisation, or sometimes a complete failure of management and systems to deal effectively with sexual harassment. This matters because the less confidence there is in an organisation’s ability to address the problem, the less likely people are to see value in calling it out, and the cycle will perpetuate,” said Melanie Walker, Executive Director, Women in News.

Almost half (46.7 per cent) of those surveyed said their organisations had no sexual harassment policy, while 35.9 per cent were unaware of what was in the policy and just 17.4 per cent were aware of its contents. And while respondents said action was taken in 42 per cent of the cases reported, the most common organisational response was to warn the perpetrator. This was followed by emotional support for the victim, dismissal of the case after review and training for staff on sexual harassment. 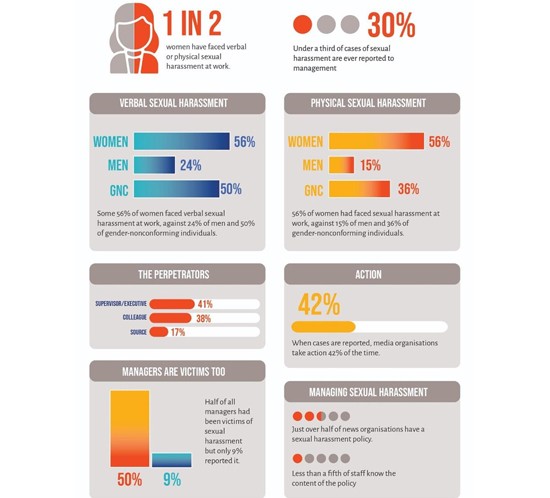 Perhaps the biggest barrier in reporting is that the perpetrators are often managers or supervisors – people with responsibility and power. Survey respondents identified their harassers as fellow employees (in 38 per cent of cases), but 21.5 per cent of the time, they were direct supervisors and in 19.5 per cent of cases, members of higher management.

“There are solutions, however, beginning with media owners and managers acknowledging the problem exists and then committing to ensuring a safer working space, not just for women, but for all staff. It is vitally important to change the culture of silence around harassment. And this culture change can only come from the very top,” said Walker.

In supplementary interviews with 32 media managers across the surveyed countries, nearly half said they felt the industry no longer has a sexual harassment problem – this is despite more than half of them saying they had been the target of harassment. Further, only one in ten of them had reported the incident – much lower than the overall trend of 30 per cent, illustrating that the fear of victimisation cuts across all cadres in the organisations.

Women in News Africa director Jane Godia says the initiative to manage and prevent sexual harassment starting to see “little victories” within media organisations that have begun to actively manage the problem – starting with adopting policies and procedures that the staff can support.

But she says the numbers are very small and “we still have a very long way to go before staff are convinced and comfortable that if there are incidents of sexual harassment, they can report them, and action will be taken without any victimisation”.

The research provides evidence of the need for media organisations to recognise the extent of sexual harassment and put in place steps to provide a safer working environment. “It all starts with a conversation on what is and isn’t acceptable behaviour in your media organisation – being explicit about sexual harassment, sharing definitions, noting behaviours that are unacceptable, and reiterating the right of every employee to be treated equally,” said Walker (pictured).

The full results of the research are available on: www.womeninnews.org/research.

The research is supported by the Swedish International Development Cooperation Agency (SIDA).