‘We’ll have it back’: Family to bid to privatise Mail 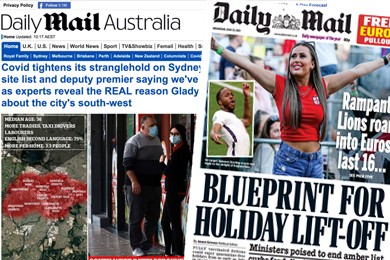 A century-and-a-quarter after its launch by Harold and Arthur Harmsworth – the first Viscounts Rothermere and Northcliffe – the Daily Mail looks to becoming a private family business again.

Its publisher, the Daily Mail and General Trust, has announced that the current Harmsworths – who still own 28 per cent of it – are thinking of making a GBP£810 million (A$1.5 billion) bid to take it private, news which has already been well received by the stockmarket with shares rising ten per cent at one point.

Once seen as a popular tabloid for a predominantly female audience, the Mail has changed considerably in the digital era. It now operates in 40 countries through a variety of subsidiaries, with MailOnline websites in a number of countries including Australia distinguished by their long headlines and homepages.

Historically, the Northcliffes and Rothermeres were among the UK’s greatest newspaper dynasties, and emerged strongly after consolidation in the 1920s and 1930s. Wikipedia notes that after Northcliffe’s death in 1922, Rothermere was one of four press barons – with lords Beaverbrook, Camrose and Kemsley – whose businesses published almost half the daily and Sunday newspapers sold in the UK, then totalling more than 13 million.

Noted for its different approach to the newspaper business – it switched to flexo printing when its competitors where shifting to offset, and in 1988 moved to Kensington after contemporaries had left Fleet Street for Docklands – it is reported to have overtaken News Corp’s The Sun to become the UK’s top-selling newspaper.

The present chairman is the fourth Viscount Rothermere.

A break-up of the business is expected to include the sale of its stake in online car site Cazoo and its RMS risk-modelling business, and with newsmedia seen as an endangered species, the family’s offer is unlikely to be exceeded elsewhere.

However, there’s also concern that the bid by Jonathan Harold Esmond Vere Harmsworth might repeat the history of Warwick Fairfax’s ill-fated bid for his family’s Australian publishing empire. Watch this space!