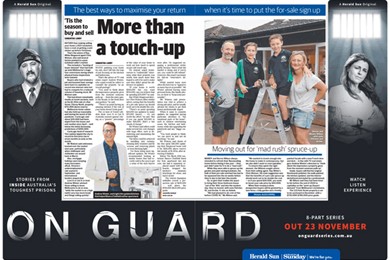 “True crime continues to be a popular genre of content across multiple media platforms,” she says, adding that the past six months have seen a quarter of its metro subscribers coming from true crime content, with audiences continuing to “pay and stay.”

In a company-wide first, the podcast was locked exclusively for digital subscribers and released to the general public upon completion of the series.

“The main focus of this campaign was to highlight the robust behind-the-scenes-style journalism that our readers couldn’t get anywhere else,” says Algate.

“As a company-wide first trial, the two-pronged audio subscription model of releasing the entire series exclusively for subscribers on-platform before releasing to a mass audience off-platform was deemed a success in acquiring new digital subscriptions,” she says, adding that while other shorter-windowing models had been trialled before, this was the first series to be completely locked.

The model also proved successful for engaging existing subscribers as it was the only place consumers could access the next episode, ensuring their return to our platform throughout the duration of the series.

“The success has paved the way for a broader true crime premium content strategy, with more exciting series currently in development,” she says.

Marketing’s ‘rock stars’ tell how newsmedia works for them