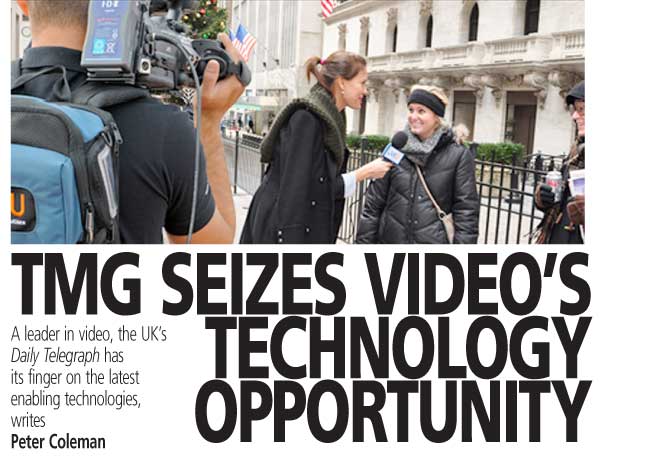 Streaming video is the new frontier for newspaper websites and UK-based Telegraph Media Group is exploiting a raft of new relatively-low cost technologies to take a leading position.

It’s one the 157-year-old publisher has been working up to, although print remains fundamental to its strategy. With two camera teams always on the road, and a head of video recently recruited from Sky News, the publisher will still typically shoot footage which backgrounds stories appearing in the print edition.

James Weeks, who joined the group in February from Sky, where he was executive producer of new media, says TMG is producing one or two live items a day and it will be a long time before its output compares with that of his former employer.

That said, he admits there’s currently an interesting commercial proposition brought on by excess of demand over supply, and video prerolls can deliver higher revenues than for equivalent static pages.

Telegraph has been developing its video and audio capability since a move from Canary Wharf to a site adjoining London’s Victoria railway station in 2007. A couple of years back, chief production officer Peter Green was proud to show me the studio on the newsroom floor, then used partly for staff writers to do live links to free-to-air news programmes.

The facilities adjoin TMG’s much-photographed radial news hub, where the only pillars support projectors which beam content from Telegraph websites onto screens around the room.

Now streaming video is increasingly part of that content, hosted on Ooyala or drawn live from sources including the APTN video news wire and a dedicated line from the BT Tower. It will be ‘nipped and tucked’ within TMG’s inhouse facility and bookended with analysis from columnists and staff writers. The Telegraph was one of the first customers of the AP Video Hub, launched in April primarily for digital publishers.

Extra ‘plumbing’ has been added to the three-camera studio, enabling it to augment live video with expert analysis and informed opinion.

The revenue stream comes in a variety of ways: While most video is available to all comers, a new international metering system invites heavy users to subscribe to digital products. Advertising may be served via tags from specialist contractors or sold direct.

The publisher doesn’t set out to create content that will be shared, but occasionally strikes lucky: One success was a clip using multiple cameras as Blur bass player Alex James took to the air in a wartime Spitfire fighter.

The online live video presence delivers news, sports, political, and entertainment not only on its website, but also to iPads and iPhones. Weeks says TMG is keeping an eye on smart TVs and IPTV, while wary of the dangers of fragmentation. “It’s hard to see how you make money out of it with the numbers quite small, and there doesn’t seem to be a winner at the moment but eventually one or two will float to the top.”

“We’ve always done video, typically more so than our rivals,” Weeks says, “but my brief has been to develop it to a more serious part of our output.”

And he says a couple of quite substantial technical barriers have fallen away, “enabling us to do it in a cost-effective way”.

One is the cost of streamed video and the technology needed to make use of it: The permanent BT connection enables parliamentary content such as Prime Minister’s Question Time while the mostly-foreign APTN coverage is good for unfolding events such as the US elections.

TMG’s newsfloor HD studio was already “far and away ahead of our competitors,” Weeks says, and adding new facilities has been quite straightforward. “Where cost has really changed is in streaming and bringing content in.”

Another is a ‘backpack’ stream box which enables live HD footage from video journalists to be sent back to the office across multiple mobile phone cards. The technology divides 1080i HD data from a SDI or HDMI connection, and transmits it via up to six 3G cards to the studio, where it is received and recombined. TMG uses the LiveU technology both for video streaming and to provide upload facilities where fading and poor cellular coverage might be an obstacle.

In the Asia-Pacific, it was used by MediaCorp’s Channel NewsAsia to transmit live coverage of the Singapore general election in May last year, while the LU70 backpack was a favourite with media outlets covering the London Olympics.

“It’s enabled us to send decently good video for live events and also to use it as a feed point,” Weeks says.

TMG has also invested in point-to-point IP video, which it has used in semi-permanent applications such as coverage of the Conservative conference last month. Technology includes Teracue’s ENC-200 hardware encoder for live video contribution, and the DEC-200 decoder receiving remote live feeds in real-time over the public internet.

“It’s a particularly exciting time for video, to be able to do things now which not long ago would have been prohibitively expensive,” he says. “Most of these facilities have been in the low four-figures (GBP) to purchase, and give us the opportunity to have video content on tap. We’ve jumped from occasional and piecemeal live video to doing several live streams a day, because we no longer have to make a separate business case for each project.

“And instead of having to organise suppliers and write cheques, we can now just deploy it.”

The inhouse team – with two VJ/producer teams always on the road – delivers specific content typically chosen with tomorrow’s paper in mind – but Weeks says he doesn’t obsess about video quality: “It could be iPhone… being there is what it’s about”.

Newspapers have the advantage that they don’t have to produce TV picture quality: “It can be cheaper, without the need to truck a dish around,” he says.

The morning before my visit, a half-hour studio interview with Olympic gold medallist James Cracknell and his co-author wife Beverley Turner discussed his near fatal cycling accident and backgrounded his autobiography from which the Telegraph is publishing excerpts. “We’ll do more of this sort of thing, then making the clips available on demand,” says Weeks.

His ten months with the group have seen the introduction of live content, and a regime of  deploying its own cameras each day, but he says, “that’s not the only thing I’ve got up my sleeve”.
Sections: TV, VOD, podcasts & audio