Nexpo brings ideas on change for those ready to tackle it 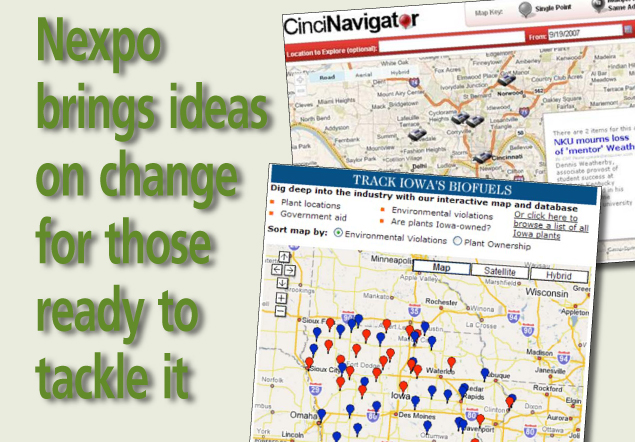 Maybe it’s a generational difference: Change is something our kids take for granted but with which their elders often have difficulty in coming to terms. And Nexpo and the NAA/ASNE convention which it accompanied, were emphatically about change. Forget for a moment, the distraction of then presidential hopefuls Hillary Clinton, John McCain and Barack Obama – speakers at consecutive days’ lunches – or even the presence in town of the Pope ... Washington was still the place to be for North American publishers confronting the challenges wrought by changing technology and reader habits. A shame therefore, that more weren’t there: I sat in on Paula Rattray’s session, the title of which – ‘rebuilding the engine while driving down the interstate’ – broadly summed up the tasks many publishers are facing but attendance was sparse. Maybe too many were in the next room, learning how to (further) extend the life of their equipment! Rattray, planning vice president of the Atlanta ‘Journal-Constitution’ was appointed for change: “Git’er done,” her boss would direct of a list of transformational projects. “Herding cats is easy by comparison,” she says. The newspaper created a new planning office for ‘traffic control’ and spent time on ‘role clarity’ and identifying the right projects ... but the payoff was significant: “Every time we’d say there was $1 million at stake,” she says. Often there was more, but each made a contribution: zone consolidation which drove $1.5 million savings and the relaunch of a homefinder section $350,000 saving in inserting costs were two in a programme of 120 projects in 18 months. Last year was a big one with the simultaneous announcement that production would be consolidated into a single plant – itself the subject of a $30 million press upgrade – with an integrated newsroom and reorganised circulation management covering a dramatically-smaller distribution footprint. Smooth introduction bringing savings worth $30 million a year are a credit to good communications skills, she says. Rattray belongs to the ‘you can only manage what you can measure’ school and when the publisher switched to a 48” (1230 mm) web width last year, she tracked the seven strong project team’s efforts and 42 per cent under-budget performance over less than five months. A contrast to the 2001 effort (moving to 50”) shared by “dozens” of team members at undocumented cost. She advocates pairing project management with change management and says senior leadership support is critical. ‘Journal-Constitution’ managing editor James Mallory provided a newsroom view of the changes in which staff were cut and redeployed to meet the needs of digital and evolving print products. “Three people kept the same seats,” he recalls. Under the new arrangement, two departments ‘pitch’ content and two catch it, and a realigned leadership team was established with a change manager as its fifth member. In a MASH-style ‘bug-out’ in which half the staff reapplied and were interviewed for new jobs, everything was moved in a four-week period. The outcome? More (and more relevant) online content – with no “print retreads” – the ability to get breaking news online faster and more easily, with operating efficiencies in the combined departments. “Writing for the web first provides for smarter and better print stories,” he says. Adjustments (and pain) are inevitable, but he says it’s hard to overemphasise or overtrain. And with hindsight, too much time was spent with strugglers: “Actively engage those who are ready for change,” he urges. And the change outside? Gannett’s design and innovation vice president Michael Maness discussed the ‘media-shifting’ influences of technologies such as Tivoli and Sling Box but says the real internet disruption is that it costs virtually nothing to build a global audience. And he contrasts today’s active young ‘lean forward’ audience of digital natives with the ‘lean back’ attitude of traditional newspaper readers and TV watchers usually in their 40s or beyond. “Subjectivity is the new norm,” he says, pointing to a mix of professional and contributed journalism. “Our trustworthiness is now measured by the inclusion of multiple viewpoints.” He listed the ‘seven primary jobs’ for publishers, each represented as a new editor or new desk (but not a new newsroom): • a strong watchdog function across all platforms; • the vital local effort that reconnects to communities; • data which includes rich calendar listings and high utility for customers; • a community conversation which moves us to the centre of local dialogue; • custom content which responds to customer need and targets key demographic groups; • multimedia which evolves coverage to include the tools of video and audio; and • a digital nerve centre which accelerates the speed and volume of news postings. The approach is altering how information is processed, gathered and selected – gathering and “chewing over” data and presenting it, sometimes in geocoded format. And on the selection of people, the difference between ‘I-shaped’ and ‘T-shaped’ people. “Look for T-shaped, they like to do more things,” he says. Transformation, Maness says, involves three steps: Defining and agreeing on philosophy, establishing priorities and changing tasks. But culture is a ‘lagging indicator’, he warns. And finally, along with the exhortations about winning small, not assuming you are right, and celebrating failure, he urges, “Get comfortable with being uncomfortable.” It sounded like good advice. gx
Sections: Columns & opinion