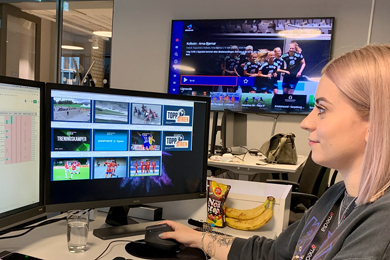 A lean team and a "can-do" attitude are helping a Norwegian publisher break new ground with video coverage.

Amedia audio and video head Tord Selmer-Nedrelid credits building its award-winning live sports vertical Direktesport, from nothing to 5000 live sports events in 2020, to "trying new things" playing on the strengths of a company with 75 media outlets.

"We were free to find new, streamlined, easy-to-use, and cost-effective solutions."

While the national women's football team has been a force to reckon with since the 1970s - winning the World Cup, Olympics and the European Cup twice - audience interest in the domestic league had been modest until a marked rise in audience attention in the last couple of years.

Commentator Thomas Karlsen in Lillestrøm (outside Oslo) runs the reruns on his production Mac. The laptop behind is showing a monitor feed from Lakselv with graphics included. Photo: Thea Langkaas

Selmer-Nedrelid says 2020 is the third year Amedia has held live broadcasting rights for women's premiere league Toppserien,which it shares with national broadcaster NRK. "There are ten teams located in the southern half of the country, and NRK produces one match per round, with Amedia producing the remaining four," he says.

"This year, in cooperation with the Norwegian Football Federation, we wanted to give the viewing experience a boost by improving the productions' graphics. Until this season, we have used our standard production software LiveReplayer, which is great in many ways, but has limitations when it comes to custom graphics."

Options were to "add more hardware and on location personnel" for every production, but to keep costs in check and find a solution that would scale, Amedia started looking for an off-site solution.

"The internet has made distance inconsequential," he says, "and we found the solution far away from the arenas."

Klepp - which is far north of the polar circle in the Lakselv office of Amedia's iFinnmark newsroom - is 1,550 kilometres as the crow flies from the southernmost arena, and a drive of more than 2200 km, the same distance as it is from Klepp to Monaco. 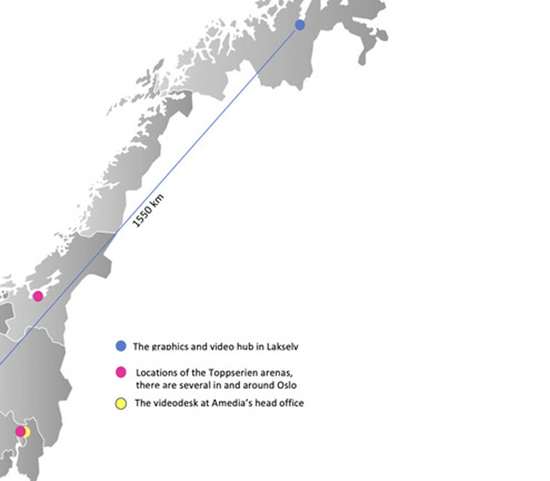 The drive from Klepp to Lakselv is 2,200-kilometres.

"Finnmark is a special place," says Selmer-Nedrelid. "It is home to North Cape, the northernmost place in continental Europe. The county is twice the size of Israel, roughly equal to Slovakia. If it were a sovereign nation, it would rank 133rd in size out of 259 nations on the CIA Book of Facts list.

"Finnmark is huge but sparsely populated with only 75,865 inhabitants. The towns and villages are far apart. Driving to the next town takes hours. In winter, there are snowstorms and the sun never rises. For a news outlet in Finnmark, streaming video makes perfect sense. It brings people together and lets them experience what's going on elsewhere in that huge county."

Amedia has a staff of 28 people in Finnmark, 22 of whom are editors and reporters, publishing three newspapers and one website, and with an impressive live video operation. 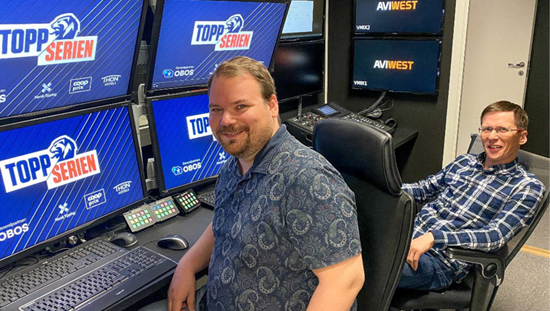 The graphics control room in Lakselv with Marius Aronsen and Roy-Arthur Myrheim. One person handles two matches at a time. Photo: Stian Eliassen

"In the village of Lakselv (population 4,000), you'll find one of iFinnmark's offices. It is headed by Amedia's video wizard Stian Eliassen.

"With ingenuity, creativity, and elbow grease, Eliassen has been at the forefront of our video development. He outfitted several OB trucks with Livereplayer and Vmix software and AviWest bonding encoders. And he built a remote production base with several studios and control rooms in a community with 4,000 inhabitants. 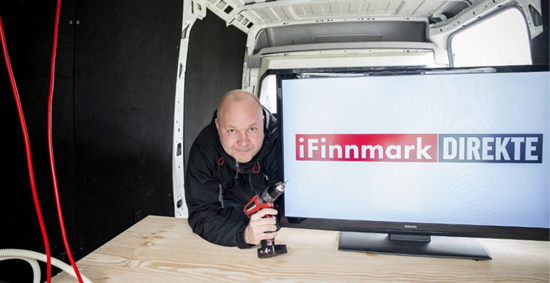 The game is produced by a two-person crew. The commentator runs replays locally at the arena. A clean feed with commentator on one audio track is streamed via a AviWest 4G bonding encoder to an AviWest Streamhub server in the cloud. 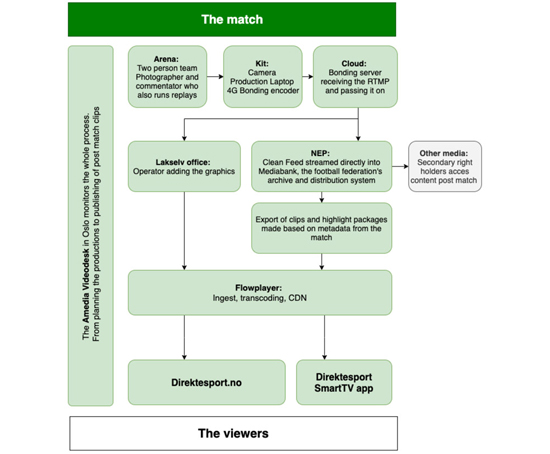 Here the stream is passed on to two different destinations. One goes to our office in Lakselv, and the other is streamed into Mediabank, the football federation's video archive and distribution system, which is run by NEP in Oslo. Metadata is added here. Based on this, clips and highlights packages are produced and distributed.

The control room In Lakselv receives the stream on computers running Vmix, where graphics are added and the sound is mixed. At the moment, one operator handles up to two simultaneous matches. For sports with more goals and events, like handball or basketball, we would probably need one person per match.

The finished stream is then sent back into the cloud to our online video platform (OVP), Flowplayer, transcoded to HLS, and distributed to our viewers at Direktesport and the Direktesport SmartTV app. A monitor stream is also sent back to the arena where the commentator can see the broadcast with very low latency.

"Before the season started, we'd sent out at tender for the graphics production," says Selmer-Nedrelid. "It was with no small amount of pride, discovered that none could match the price nor the efficiency of our own Finnmark video crew."

Based on an INMA audio and video innovations blog with permission.