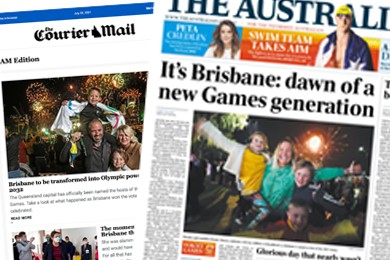 In the days when newspapers broke news, timing of the announcement that Brisbane had won the 2032 Olympic Games would have been just about perfect.

Even now, for print media on Australia’s eastern coast, the early evening news from International Olympic Committee delegates in Tokyo following a 45-minute pitch from state and national interests, was ideal.

As a result, the local metro daily Courier-Mail – with 44 pages of coverage and taking some of the credit for the outcome – and perhaps unusually, The Australian, which sometimes struggles with sports and evening news, were able to go to town.

Timing of the 72-5 vote – tweeted by an excited Queensland premier Annastacia Palaszczuk at 6.32 pm – was also good for TV broadcasters, with headlines making the start of the SBS news at its regular 6.30pm, and well placed for the ABC’s 7pm evening broadcast.

At GXpress, our mailbox was also busy… but with ‘Minister Colbeck Media’ on behalf of the sports minister and prime minister Scott Morrison (6.33pm) and the Courier-Mail (6.35pm) both pipped by Australian Sailing, where commercial and communications chief Michael Martin clearly had his finger on the ‘send’ button with a prepared release at 6.32. Augurs well for our yachting outcomes, both in Tokyo and Queensland.

Brisbane 2032 venues include the city itself, the Gold Coast – where the Commonwealth Games was held in 2018 – and the Sunshine Coast. News today is that mining magnate Gina Rinehart has secured herself a front row, spending $34 million of her reported $31 billion personal net worth on a beachside home there, (some way!) down the road from the GX office.

Marketing’s ‘rock stars’ tell how newsmedia works for them