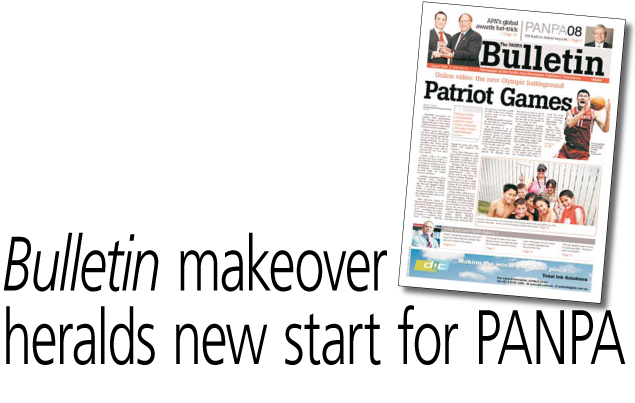 A revamped tabloid magazine is a cornerstone in the rebuilding of PANPA’s sense of community, under new chief executive Mark Hollands. The newspaper-style ‘Bulletin’ – with a new distribution model which puts copies into publishers’ tea and breakout areas – was being printed by APN’s Yandina print centre this month. The fourth chief executive of the Pacific Area Newspaper Publishers’ Association since Frank Kelett left in 2001, Hollands says he learned early on of the magazine’s key role: “Members pretty much said that if there’s no Bulletin, there’s no PANPA,” he says. There has been plenty to do in his first couple of months in the job, “rolling up his sleeves” to get the new magazine out and also create a new format for the association website. “Essentially the job of an industry association is to have a public face and represent members’ views,” he says. “It’s hard to do that if you don’t also gather up those views and understand what they collectively are.” Hollands says he didn’t so much arrive at PANPA with a vision, as a “set of practical steps” which needed to be taken. “In part this was some of what I had learned as a member of the Australian Information Industry Association and while working at Gartner,” he says. “We needed to get the business straight.” He was struck by the need to improve relationships – “get out and be seen more” – and formulate with the board a strategic plan for where they want to take the association. The board itself is now back to strength, with two News Limited members – Campbell Reid and Joe Talcott – replacing Warren Beeby, who retired last year, and filling a vacant seat. Hollands says the response from both News and Fairfax has been very encouraging: “They see the need for an industry association which shows some value back to the members themselves ... working harder on specifications for example, to make this a more efficient industry.” With PANPA’s commercial side now “doing well”, the other big focus has been the annual conference, being held on Queensland’s Gold Coast from September 8-10. A recent coup was to get prime minister Kevin Rudd to return as keynote speaker, and Hollands says the exhibition sponsorship and speaker programmes are looking much healthier than this time last year. “Now the job is to concentrate on getting bodies through the turnstiles,” he says. A greater role is also planned for PANPA’s advisory groups – covering areas such as editorial, sales and marketing, and ‘technical’ – with the intention of feeding information back to members as well as the executive. And from alliances with organisations such as WAN, Ifra, INMA, SWUG and The NewspaperWorks to “ensure PANPA members see some value from them,” he says. Hollands has no pretensions about the job he has taken on: “I knew I needed to look at it from ground level and not 30,000 feet,” he says. “Ultimately, CEO is a very grand title for what is really a small business, with the cash flow challenges amd other problems which go with that.” And as it happens, ‘ground level’ is an agreeable place to be after jetting around for a proportion of the ten years spent with information companies Gartner and Dow Jones. He also admits to relishing the prospect of a ‘turnaround opportunity’ – “I hadn’t had a chance to do that before” – and brings the small business experience gained at barely arm’s length when his wife, Kylie Davis founded Balmain’s ‘Village Voice’ in 1994. Davis is currently managing editor, business development on Fairfax Media’s ‘Sydney Morning Herald’, while ‘Village Voice’ has been passed to News Limited with a bundle of Federal Publishing mastheads. “There’s always been one of us in newspapers,” says Hollands (44), who left school at 16 to join the local paper in Sidmouth, England. His CV includes time on a rugby magazine, then Fleet Street, and the first of several stints at ‘The Australian’ when he arrived in Australia, aged 21. He subbed in Port Moresby, went back to the ‘Oz’ as foreign editor, working then in circulation and launching its first website, before joining the small band getting internet service provider Ozemail underway. Returning to a “great job” as IT editor of the ‘Australian’ for a couple of years, he was then lured away to new venture: “I knew all these people making a stack of money, so I joined this dotcom called Beenz ... and it flamed out spectacularly,” he recalls. gx
Sections: Columns & opinion

Dietmar Schantin: Subscription teams could learn from online dating
Dietmar Schantin: Bringing the joy of serendipity to digital
Matthew Lynes: Publishing and the planet – Why it is time to take the relationship seriously
Kevin Slimp: Knowing when to invest in your newspaper's future
Kevin Slimp: A great time to be in print
Ulbe Jelluma: Digital’s downfall is print’s gain