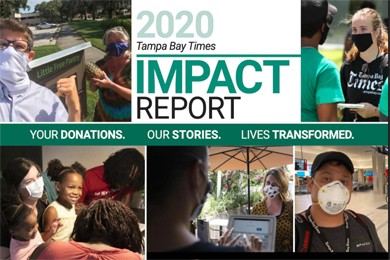 As more publishers look beyond subscription revenue to philanthropic support, two new US resources show how media peers are doing it.

One is from the Local Media Association – where chief innovation officer Frank Mungeam has penned a new report, ‘Pathways to philanthropy’ – while News media Alliance also has a “news impact project tool kit” for members.

The message is simple, and about not hiding your light under a bushel. Strut your stuff, and make sure readers know the value of their local media… after making sure that it’s valuable in the first place, of course.

LMA has been publishing case studies from its six-month Lab for Journalism Funding based on participants’ efforts, and has an excerpt from the new report today.

Mungeam makes the case for publishing a community impact report, “one key element needed to gain philanthropic support for journalism”, with a list of other best practices upcoming.

One such is the Tampa Bay Times (pictured), which although separate, is owned by the Poynter Institute. Its document came out of the LMA lab, and includes such elements as a letter from the editor, a ‘statement of mission and purpose’, and examples of key reporting, with their outcomes and impact.

He makes the point that impact and story count aren’t the same thing, and that awards also demonstrate commitment and service to the community. “Framing does matter,” he says.

And obviously, “how you can help” with concepts including submitting story ideas to subscription and donation options. He quotes the paper’s development and community relations director Annica Keeler, who cites the example of a reader who was already a subscriber, but responded immediately to the report.

She told how reading the report made her feel connected to the community, adding that it was “so beautiful to see how people help each other by your reporting”. Keeler says the email almost brought tears to her eyes, “because that’s exactly what I wanted with this report”.

News Media Alliance’s News Impact Project Tool Kit is a resource members can use in meetings with government and community leaders and teachers to help reinforce the civic role journalism plays in home communities.

“They can help remind community members of the role journalists play in ensuring accountability within their local governments, and the importance of supporting local news publishers “through subscriptions, donations and more”.