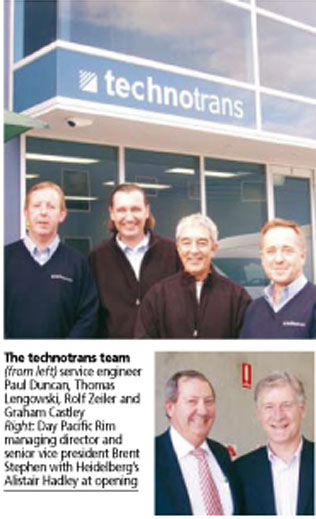 Press peripherals maker technotrans technologies has officially opened its Australian offices with Graham Castley, technical sales manager, heading up a new Melbourne-based operation backed up by service engineer Paul Duncan. Castley – who had worked for Plunkett & Johnson when it had the technotrans agency – began the Australian office last year and within 12 months, it went from a one to four-person operation. “We have a significant user base in Australia already of equipment supplied by OEMs. This branch is all about servicing the Australian market very well. We want people to know technotrans is now in Australia,” he says. “In today’s market, any expenditure requires significant justification. The fact technotrans wanted to establish an office in Australia shows they’re serious about servicing this market. And vice chairman Asia Pacific, Rolf Zeiler – who travelled out for the May opening with general manager Thomas Lengowski – says, “We’re here to stay.” The new offices are in Lewis Road, Wantirna. gx
Sections: Newsmedia industry