…Thought we could: Bob Lockley on transformation 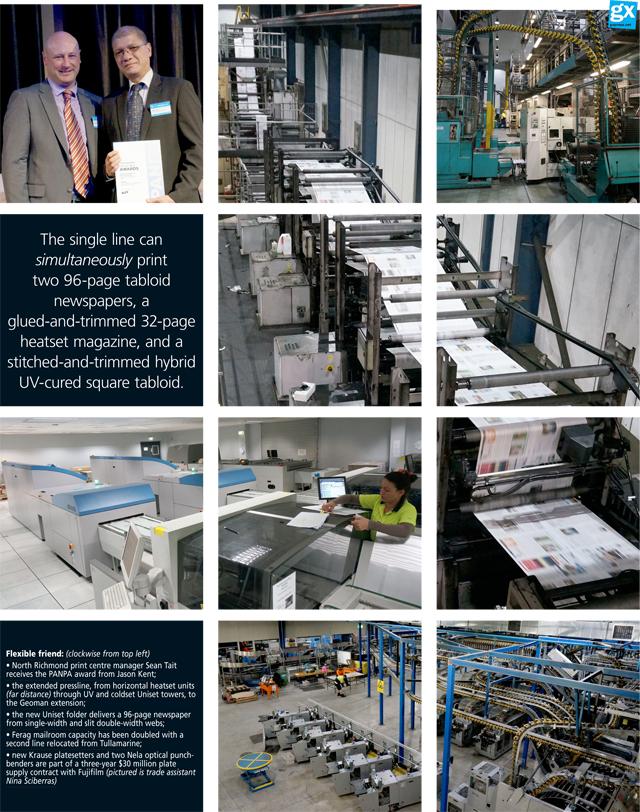 Mist is lying below, but atop a hilly paddock in semirural New South Wales, there's a low hum from a newly-extended industrial building.

It's late evening and we're about 60 kilometres from the centre of Sydney - an hour when traffic's light - and the hum is the sound of success… of Fairfax Media quietly getting on with the business of printing one of its flagship dailies at one of its regional print centres.

A similar exercise is underway in Ballarat, 110 km out of Melbourne, in line with the Australian group's 'Fairfax of the Future' programme… and with what we wrote - under the headline The little engines that might - just two years ago.

It's been an exciting two years, starting with the Australian media group's plan to cut the production costs of its flagship dailies by shutting down the showpiece steel-and-concrete factories so proudly established in a more optimistic era a couple of decades before.

And tonight in North Richmond as in Ballarat, with the Australian Financial Review already being trucked into town and copies of the Sydney Morning Herald coming off two folders, the fulfilment of that plan is emphatically on schedule: “It's very unusual to say this, but we're on budget, on deadline and will achieve the savings we proposed,” says Bob Lockley, the group's chief executive for print and distribution. “And with a payback of under a year.”

Facing diminishing print circulations, Fairfax has spent to save: A capital expenditure of $42 million set to deliver savings in excess of $40 million in the first year, plus the proceeds of the real estate freed up in Chullora (Sydney) and Tullamarine (Melbourne).

“So it's a pretty attractive deal, and as Greg (Hywood, Fairfax's chief executive) will tell everybody, we're in newspapers until they're not profitable, and while they're profitable we'll keep printing them.

“What we are doing here is testament to that.”

Sale of the former Age Print Centre building - with its symbolic 'rolled newspaper' of glass and concrete alongside Melbourne's Tullamarine Freeway - is about to go through, with vacant possession by Christmas. But not before its halls - close enough to the city's airport to have required special design work to avoid interfering with radar - have been stripped of the press and mailroom equipment which, with the building itself, had accounted for most of a $220 million investment when it was opened by state premier Steve Bracks in July 2003.

Half of the 18 double-width manroland Geoman press towers, all of the folders and Ferag mailroom equipment have been redeployed at the two key regional sites or earmarked for projects in New Zealand and elsewhere. The remainder (including another nine towers) have been cannibalised for parts or scrapped.

A worse fate awaits the larger plant at Chullora in Sydney's inner west: Virtually the whole of the 22-tower, five-folder Colorman pressline, and most of the seven Muller Martini Newsliner inserting lines and mailroom system - part of a $340 million original investment - is being scrapped.

“It's shocking, but nobody wants them,” says Lockley, “and that's in the world”.

Indeed in Europe and elsewhere, the secondhand market is awash with newer equipment as publishers either cut back or opt for the latest automation to reduce production costs. That said, it's still hard not to become emotional over what is happening: “You walk in there now and it's morbid, terrible,” he says, “but I have to say that both sites performed well right to the end.

“The transition has been very successful. We've done quite well to achieve what we've done.”

What Fairfax, Lockley and a team of handpicked managers and staff “have done” is in fact, little short of amazing.

A network of regional printing plants already in pretty good shape following successive upgrades adds strength one to the next, providing contingency back-up as well as routine preprint capacity.

But it was geographic reality that dictated that North Richmond in NSW and Ballarat in Victoria would take on the heavy lifting of the SMH and The Age.

At both centres, new building to accommodate press and mailroom extensions and the relocation and installation of equipment has taken place without disrupting production.

At North Richmond, staff and suppliers negotiated mud to access works and a Bunnings portable carport served as a loading dock fed from one conveyor. There, a standalone three-tower Geoman plus a further tower - re-engineered to match the width and plate lock-up of the existing Uniset - were relocated from Tullamarine, together with a complete Ferag drum inserting line, to which new RollStream collators have been added.

Leveraging some of what has been learned since the Geoman was installed in 2002 - and in what is understood to be a world first - a double-width web from the modified tower is slit, turned and combined with single-width webs in a Uniset folder.

Other new elements include QI Press Controls' closed-loop IDS colour density system - which has been given its head following calibration and training - and “pretty fantastic” Segbert automated palletising.

An eight-week transition process saw first 25,000 copies, then 50,000, then the whole of the weekday run of the Herald moved to North Richmond a week ahead of the June schedule.

On my evening visit to North Richmond - somewhat poetically after a day helping judge PANPA technical excellence entries and the new 'print centre of the year' category - Tuesday's smaller products and 140,000 print order were being taken easily in their stride.

Later in the week, Saturday's fatter book and 200,000-plus print order, and the Sunday Sun-Herald are also shared by Beresfield - where a six-tower Uniset prints the Newcastle Herald and other work - and the Canberra Times site in Fyshwick, ACT.

In an emergency, the Goss Uniliner 70 at Ormiston in suburban Brisbane - which prints Queensland and northern NSW copies - could deliver papers for “further down the coast”.

Lockley says the transition here and at Ballarat four weeks earlier has been “very good”, marred only by a few commissioning problems with ex-Chullora publishing gear at the Victorian site. And he paid special tribute to the engineering work of the local manroland team: “The Geoman is going wonderfully, really pumping it out, and the integration of double-width into single has been pretty good,” he says.

On the mailroom side, I had seen the new Ferag collators lined up on a visit to the factory in Switzerland last September, but at North Richmond it was hard to pick the new from that relocated from Tullamarine. “It's good stuff, and was all in good shape,” Lockley says.

Two vertical towers have also been equipped with Baldwin's watercooled QuadCure UV - based on technology the maker acquired from Nordson (and UK-based Spectral/Wallace Knight) - providing capacity for another 32 pages. The $750,000 world-first order signed in 2011 also equipped two towers of the double-width Geoman in Canberra, delivering further 64 UV pages.

And in Ballarat, a heatset printing based from a double-width tower from Tullamarine and a new dryer is just coming on stream. Like North Richmond, the focus is on flexibility, with the line configured for two 96-page coldset products or two 80-pagers and 32 heatset, with flexibility on web widths and the ability to mix heatset and coldset.

Lockley admits that bedding in UV has been a hard road, but says it “does a good job for what it is”. Most of the Sun-Herald's (and Sunday Age's) Sunday Life magazine is printed UV on uncoated stock, a production statistic which has apparently made Fairfax's two sites the world's biggest consumer of UV ink.

The UV towers can also be used for coldset, typically without a washup: “It's not worth taking the ink out,” Lockley says.

With the glossy Good Weekend printed heatset, all the Sydney Morning Herald publications have now been brought inhouse at North Richmond and Canberra, taking the range of stocks used from 36 gsm (for customer Guardian Weekly) to 115 gsm. Finishing is typically on two inline trimmers and two offline trimmers, with offline facilities also including two saddlestitching lines, one with log feeders.

Fairfax tackles the daily logistics by palletising and shrink wrapping bulk bundles, which are trucked to Sydney Distribution Centre in Chullora (soon to be relocated to Eastern Creek) where bundles are switched to smaller vehicles for drivers to make up newsagent deliveries. Magazines and independently-published newspapers handled by Fairfax's IPS distribution business are delivered with them.

Most of which happens while the rest of us sleep: With up to 700 tonnes of paper going into and out of the site weekly you'd also think the locals would notice, but with most activity between 10 pm and 2 am that does not seem to be the case.

A $1 million investment in a circular roadway and car parking keeps heavy traffic flowing. Attention to compressor and pump noise and reversing beeps has ensured that there have been no complaints, an achievement even allowing that Fairfax owns 20 hectares of neighbouring land.

With the growth of the print centre to 128 full-timers and 40 casual staff has come the influx of new skills of heatset and sheetfed printers and bindery operators who Lockley says, “have brought a wealth of knowledge to make this commercial plant even stronger”.

In fact, the print centre growth is only part of the story, with the simultaneous move of group accounts, finance and IT staff to newly-converted offices, where they join those for rural newspaper The Land to bring total numbers in North Richmond to 350. Most positions have moved from the Pyrmont head office, where a freed floor has been sublet to Google.

Lockley will tell you otherwise - that he's equally proud of all the Fairfax sites; that the credit goes to a team of “company-grown” managers including Mick Gee (now general manager of the North Richmond, Launceston and Beaudesert sites and heavily involved in national sales) and print centre manager Sean Tait - but it's hard to ignore the intense (and justifiable) pride he has in what has been achieved at North Richmond.

He joined Rural Press's Hawkesbury Gazette in 1984 with the current site development just underway, after taking his career at Rupert Murdoch's Cumberland Newspapers from compositor in 1966 to production manager… and has been there ever since, looking for a competitive edge and scoring a succession of “firsts” in the process.

“I thought there was more opportunity way back then with the Rural Press group and I was 34, and have gone on looking for the 'better solution' ever since,” he says. That quest has gone from tweaking the output of Goss Urbanite and hybrid Community presses at Richmond, to leading, upgrading (and sometimes rationalising) all of the Rural sites prior to the 2007 merger with Fairfax Media, and as group production and distribution chief executive, those of the whole group since. He will have been with the company 30 years in September.

Two years ago, I looked at the challenges facing Fairfax's plan, expressing them in The little engines that might (GXpress August 2012), illustrating it with images of Lockley and Hywood aboard a cartoon train.

Against our positive view that the programme could be achieved with measures which have mostly been taken, we presented the doubts expressed to us by some. And were later quizzed at great length by author Ben Hills, who presumably did not get the message he was seeking for his Stop the presses! book.

The passage of time has added the wisdom of hindsight, and it's good to be able to paraphrase those 'little engines' puffing out a blast of steam and exulting, “I thought I could…”

Lockley remembers the piece and has another image: “You should do a new one with steam train going along at 100 bloody miles an hour,” he says. 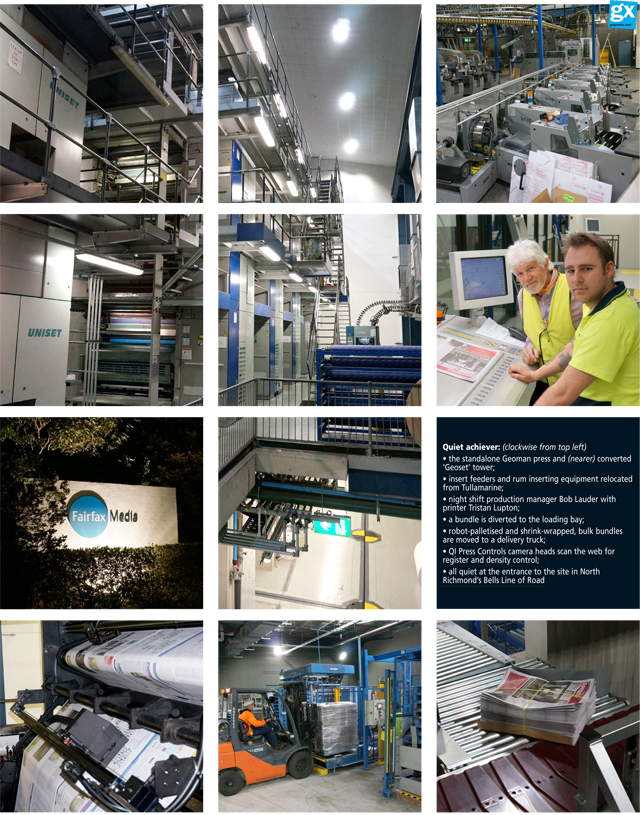 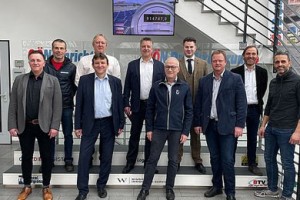 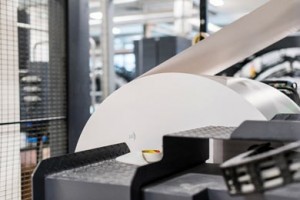 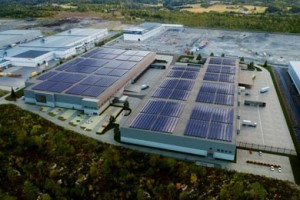 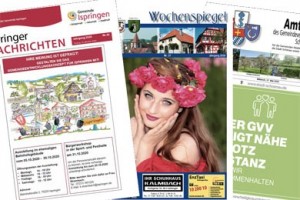 Targetted print? Digitally does it for Druckerei Schlecht 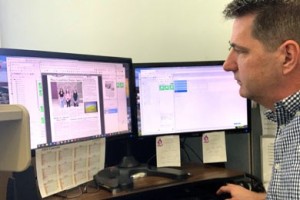 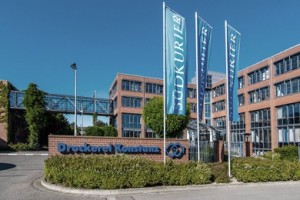