Peter Coleman: The high bar that is ‘trusted news’

It’s been an interesting time for fake news and conspiracy theories. But then, elections – including the US mid-terms and Australia’s upcoming Victorian state poll – seem to have that effect.

It seemed to start with a story about an election news-sheet – for lack of a more apt or accurate description – which had taken sides on the gubernatorial aspirations of Illinois incumbent, Democrat J.B. Pritzker and Republican challenger Darren Bailey. 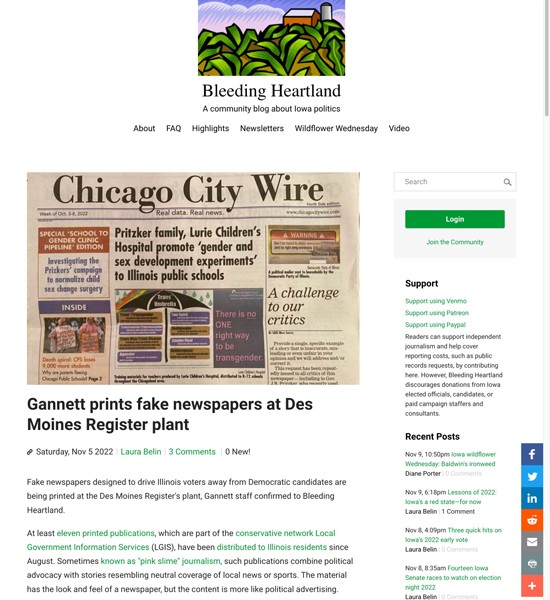 All of which may be history now, given the long-serving “billionaire businessman, philanthropist, and politician” has now been returned to office, but the form campaigning takes continues to be an eye-opener. Bailey’s – and no-doubt, Trump’s – side was supported not just by social media and a website, content for some of which seemed to have been automatically generated, but by a printed edition or two. And the fuss in town was that with the local paper in that state forbidden from doing so, the neighbouring Gannett Des Moines Register had printed it as a contract job, to the offence of some of the paper’s regular readers. 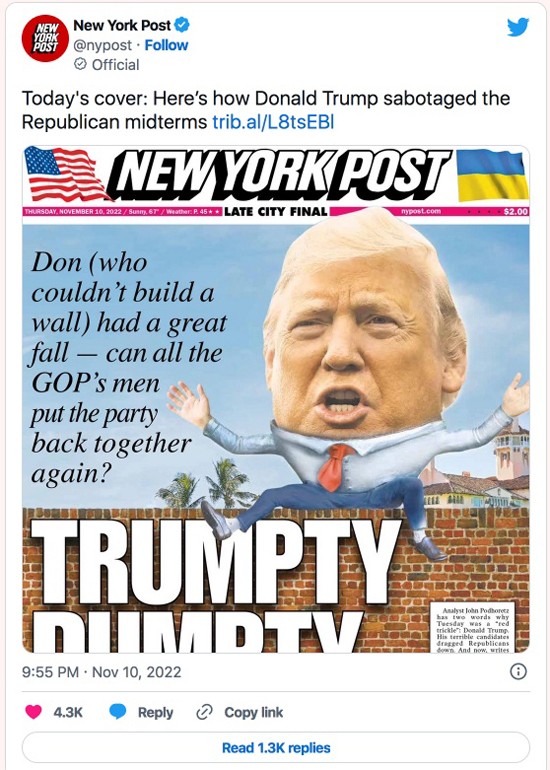 Did I mention the ex-president? Notable too lately, has been a New York Post front page referencing “Trumpty Dumpty’s great fall”… presumed to indicate something of a change of heart at the NewsCorp headquarters (reinforced by more recent reports and an editorial in the Wall Street Journal, despite the traditional line that editors make their own decisions). We’ll watch with interest.

In Australia meanwhile, News – recently favoured with a visit by Lachlan and Sarah Murdoch, ostensibly for the publisher’s media awards presentations – has naturally interested itself in what’s happening in Melbourne. Or more precisely, the seaside town of Sorrento. 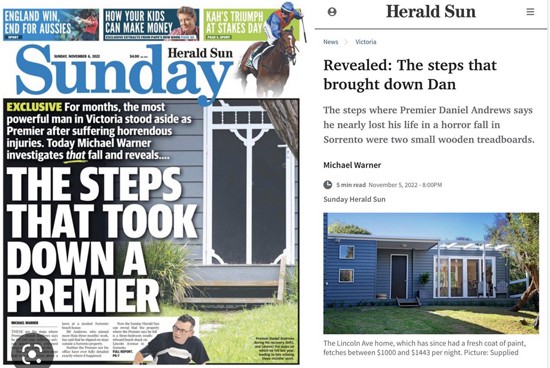 Ignore for the moment, the routine knockabout of ‘Can Victoria take another four years of Dan Andrews’ (The Australian’s Ticky Fullerton) and suchlike; attention instead is being focussed on metro stablemate the Herald-Sun. Or rather, its Sunday edition, which dedicated a front page to a photo of some stairs at a beach house where the premier had fallen in 2021… and some space to “alternative theories” about what happened and where, while adding that “none have been proven”.

In a piece in Guardian Australia on the subject this week, Oregon university assistant professor Whitney Phillips likened the Herald-Sun front to “dousing ‘a smouldering fire… with gasoline’.” Analysis using the Crowdtangle social media tool had also showed how the report “reignited discussion on Facebook, Twitter and Instagram – much of it conspiratorial”.

And there was much more

Not for us to discuss the rights and wrongs of an investigation. Only to note the risks publishers and editors take when facts are in short supply. And their legal obligations under contempt of court rules, something to be borne in mind if the case against Bruce Lehrmann ever gets back to court.

Much is made of the commitment of publishers – some in particular – to “trusted news”; this month’s happenings only to serve to show how high a bar that is.