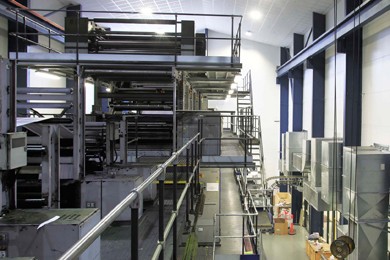 News will take over some of the plant from ACM’s North Richmond print site – due to close next month – along with more of the regional publisher’s work.

The site – one of only two still operating within Australian Community Media, and the only one with heatset equipment – will close on June 25, general manager printing Jon Clark confirmed yesterday.

ACM announced in April that the plant would close this year, “following on from a decision in 2020 to cease external and internal heatset printing”, but had not specified a date or other details.

ACM chief marketing officer Paul Tyrell confirmed the closing date, but would not comment on other aspects of our report, adding, "we have nothing confirmed".

Earlier this month it thanked employees and customers and repeated executive chairman Antony Catalano’s commitment to finding ways to take “onerous cost” out of the business and set it up for the future. “This decision, while difficult, is critical in establishing a streamlined, capital-light business that can compete in this rapidly changing media landscape,” he said.

The statement said ACM “was committed to maintaining its printed products” and had sourced alternative printing arrangements following the closure.

Despite closures including of some former APN Print sites, News is emerging as Australia’s dominant contract printer and a major supplier to ACM and Nine Entertainment, both of which have declared their intention not to be “manufacturing” newspaper publishers.

Clark, who is based in Canberra, was onsite in North Richmond this week as ACM made preparations for the closure. The site includes double and single-width manroland equipment in a single hybrid line equipped for coldset, heatset and UV-cured printing, and was upgraded for bulk production of the Sydney Morning Herald and the Australian Financial Review, a brief arrangement which saw robot palletisers used to stack copies for trucking to a distribution centre further into Sydney’s suburbs.

Although News and the then Fairfax Media agreed to share production capacity, this has turned out to be a largely one-way arrangement, with Fairfax (and successors Nine and ACM) moving their Brisbane work to News’ Murarrie site, but News claiming Fairfax’s Ballarat site was too far out of Melbourne to print its metro daily Herald Sun. Former Fairfax print sites in Ormiston (Brisbane), Beresfield (Newcastle), Fyshwick (ACT), and Ballarat (Victoria) have since closed, with North Richmond now set to do so.

News Corp Australia is in the process of closing its Murarrie (Brisbane) site, moving the balance of production to Yandina on the Sunshine Coast, and is commissioning a new smaller print site at Truganina in Melbourne’s western suburbs. Press equipment for this has come from Ormiston and Chullora (Sydney), with mailroom from the former Guardian print site in London. GXpress understands new management is in place, while the company this week placed advertisements on the Seek recruitment website for full and part-time printers. Candidates should be able to work flexibly, and be “process driven with a high level of attention to detail”.

News had not responded to requests for comment or further information at the time of posting.